Best Writing Aids For Those With Parkinson’s

Best Writing Aids For Those With Parkinson’s

If you or an aging loved one suffers from Parkinson’s Disease, you know that the uncontrollable shakiness can be not only frightening but also incredibly frustrating during daily tasks such as brushing teeth and attempting to write. Thankfully, some devices exist to help steady a sufferer’s hand while writing. So, we’ve picked our favorite writing aids for seniors with Parkinson’s on the market right now.

How We Found the Best Walking Canes with Seats 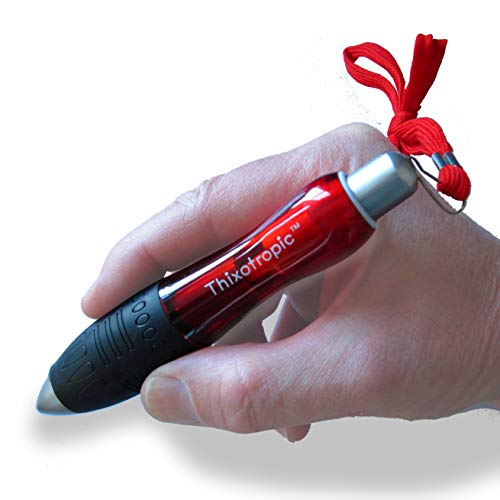 The Thixotropic Heavy, Big Weighted Pen is explicitly designed for seniors with Parkinson’s and/or tremors. This package comes as a twin-pack; both pens connect to a wrist strap to prevent the pen from falling to the floor if dropped—this is a significant benefit to elderly who have trouble grabbing things or bending over.

This pen writes with black ink from long-lasting metal cartridges. As of this posting, the company also has a Parkinson’s aid stylus for smartphones and tablets in development, too. The seller is responsive, which we love if you need a replacement or return on these pens.

Once your ink runs low, these pens can be refilled with any Parker-style ink refill. We also like that the bright red color of the pen makes it easier to find than a typical white or black pen. The decent price, the hefty weight, convenient wrist strap, and thick, ergonomic grip make this our favorite general pen for seniors with Parkinson’s.

This is our overall favorite pen for the full grip and the hefty weight, along with the wrist strap to prevent dropping.

The Aids to Daily Living Steady Write Writing Pen is a pen attachment (with a pen included) that focuses on stabilizing the writing instrument, rather than weighing it down. The triangular base rests on the paper to help steady the user’s hand. The grip takes a bit of getting used to for some seniors, but many find this additional resting device beneficial in the making of smoother handwriting with Parkinson’s or even arthritis.

We like that a pen is included, but you can switch it out for another pen or a rounded pencil if you prefer. This is ideal for elderly users who have a favorite pen or pencil, or even those who purposely exercise their hands with colored pencils and drawing.

While reviews are a bit mixed with some other conditions, most of the five-star ratings are from users with Parkinson’s Disease in particular. It also can be helpful for senior with carpal tunnel as the shape forces the user to grip the pen or pencil at a different angle than usual.

We love the smooth, steadying design of this triangular pen attachment. 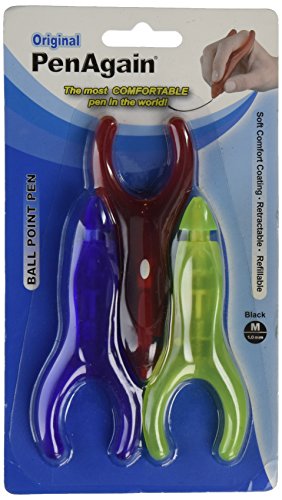 The PenAgain 3 Pack of Pens is a set of ergonomically shaped pens that fit between your index finger and curve around it in a wishbone shape. This helps utilize the weight of your hand to hold the pen against the paper, therefore making it ideal for seniors with larger hands who have Parkinson’s or tremors.

The three-pack includes one blue, one red, and one neon green outer case (each writes in black ink). These pens are easy to refill and convenient to find in a drawer thanks to their unique shape and bright colors. Each pen also comes with a cap at the end to prevent drying out the ink.

These are particularly favored by users with Parkinson’s. So, we found them to be ideal pens for elderly sufferers of Parkinson’s, especially for those with larger hands. If you’re a fan of this pen, they also make pencils with the same design that also have refills.

This wishbone-shaped pen is fantastic for utilizing the weight of larger hands to steady writing. 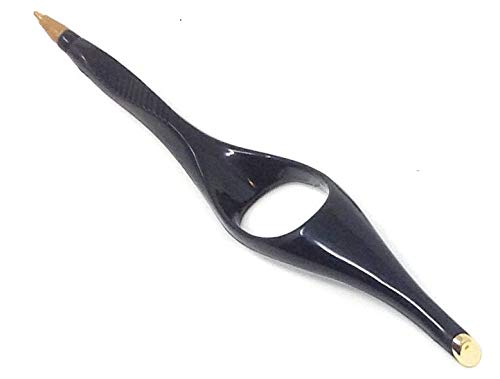 The Beacon-Ridge Ring Pen Ergonomic Ball Point Pen is designed as the name suggests: it slides onto your index finger and you grip naturally. This action both helps to utilize the weight of the hand as well as gives elderly a better grip on their writing device.

The “ring” hole of this pen is fairly ample in size. So, most senior’s hands will fit this ring pen. However, if you have extra-large fingers, it could be a bit tight and uncomfortable. This pen does not require much pressure at all, making it ideal for the elderly with weak grips or frail hands.

Not only is this pen fantastic for use with Parkinson’s, but also for arthritic seniors as it requires such light pressure. It’s also well-rated by individuals with Essential Tremor. The more aligned, light grip of this ergonomic design also helps relieve hand and wrist pain for seniors with carpal tunnel and fibromyalgia. We love the steadying grip of this pen for those with smaller hands.

We love that this ring style pen is designed mainly for those with a weaker grip as well as tremors and shakiness.

What to Look for in a Writing Aid for Parkinson’s

The best writing device for you will depend on a few factors such as your hand size and whether you need more weight to your pen. Keep an eye out for additional factors, such as whether a pen cartridge can be refilled and the cost of the ink refills.

The size of your hand will naturally influence which writing device works best for you quite a bit. If you have exceptionally large hands, a pen with a thick grip or that utilizes the weight of your hands can be extremely beneficial.

Conversely, if you have weak or tiny hands compared to the average adult, you’re likely to need a pen with a more stabilizing quality to it. Consider the possibility of writer’s cramp, as struggling to write with Parkinson’s can take a long time. If a wide grip tends to give you writer’s cramp, stick to something like the Ring Pen Ergonomic Ball Point Pen or the steadying device from Aids to Daily Living.

Some seniors will actually find that a thicker grip will keep the writer’s cramp at bay better so it may take a little trial and error.

If you notice your tremors tend to lift your hand up off the page more than moving it side to side, a weighted pen is our recommendation. The Thixotropic Heavy, Big Weighted Pen is an excellent choice in this case, as it weighs 3.5 ounces (roughly 10 times that of a standard Bic pen). We also love the wrist strap on this particular pen for those whose Parkinson’s not only made their writing unsteady but who often drop their writing device because of the condition.

When the standard grip of holding a pen or pencil is uncomfortable or unmanageable for elderly with Parkinson’s or even arthritis, a device that changes the way the pen is gripped is a fantastic idea. Both the Aids to Daily Living Steady Write Writing Pen and the PenAgain 3 Pack of Pens do this to some extent. So, these options could be worth a try.

If Dropping Is An Issue

Some seniors with Parkinson’s will find that shaking is not the only struggle with writing. If dropping your writing device frequently is a problem, getting either a ring style pen (that slides over your index finger) or a pen with a wrist strap is recommended.

Especially for elderly individuals who might have trouble getting back up after bending over or who suffer from back problems, we highly recommend one of these two styles.

Parkinson’s can be a frightening and frustrating condition when it comes to nearly any movement, but especially those that require dexterity. It’s recommended by Parkinsons.org, however, to remain as active as possible to slow deterioration with the disease. So, while it might be exasperating to write or draw, it’s suggested that those with the condition do their best to keep at it.

Having a writing device to alleviate some of the struggles can add motivation and a feeling of independence. Considering most writing aids are relatively low cost, we think they’re worth every penny if they can boost the moral of aging patients with Parkinson’s.