Hearing loss is a widespread problem. In fact, more than 48 million Americans struggle with some type of hearing loss. Some may encounter mild hearing issues in one ear due to earwax buildup, while others may deal with profound sensorineural hearing loss. If hearing damage is complete, even the best hearing aids can’t help. That can lead to communication disorders later in life.

Cochlear implant surgery may be the best route for severe inner ear damage. Cochlear implants bypass the ear canal altogether and change sound into electrical signals. Those signals stimulate the auditory nerve so it can interact with the brain. While they come with complications, cochlear implants grant hearing to many people with profound ear and nerve damage.

Are Cochlear Implants the Same as Hearing Aids?

Cochlear implants are hearing devices that you cannot remove from your ears. They also don’t amplify sound waves. Instead, these implants use sound to stimulate the auditory nerves inside the ear. Those nerves then send electric signals to the brain, giving the user the sensation of sound.

Implants are for people with serious cochlear nerve damage. This type of damage usually leads to severe or complete hearing loss. Implants can be unilateral–meant for one ear–or bilateral– meant for both ears.

Is a Cochlear Implant Better Than a Hearing Aid?

That being said, if you have severe sensorineural hearing loss, only a cochlear implant can help. It’s also important to know that implants are likely to eradicate any remaining hearing of the natural ear. This means that someone with implants will be completely reliant on them for hearing.

Hearing aids are less expensive and require less commitment. That makes them the better option for anyone with less severe hearing loss. Small hearing aids can also be hidden behind or inside the ear so they aren’t noticeable.

The biggest difference between hearing aids and cochlear implants is the price. Since they do not require surgery, hearing aids cost thousands less than an implant.

Hearing aids also come in a wide range of models and styles. These include:

The biggest difference between hearing aids and cochlear implants is the price. Since they do not require surgery, hearing aids cost thousands less than an implant.

Cochlear implants consist of external and internal parts. The external part has a microphone and speech processor that are linked by wires to a transmitter. The internal part links to the transmitter under the skin behind the ear, connected by a strong magnet. It converts electrical pulses and sends them to parts of the brain that receive sound.

In addition, speech pathology may also be needed to learn how to interpret sound signals. That’s why cochlear implants are commonly used for infants with profound hearing loss.

How Do I Know If I Have Hearing Loss?

Hearing loss can stem from many sources, including damage to the eardrum, auditory nerves, cochlea, hearing bones or the brain. Anything from genetic factors to loud noises to earwax lodged in the ear canal can cause damage.

If you suspect you have hearing damage beyond normal hearing loss, it would be wise to get a hearing test at an ENT specialist or audiologist. There are also free online hearing tests you can try.

How To Choose Between Cochlear Implants vs. Hearing Aids

After you’ve had a hearing test, you should have a good idea about how much hearing impairment you have. If your hearing loss is severe enough to warrant a cochlear implant, your doctor will be able to recommend that based on your tests.

Studies by the Food and Drug Administration (FDA) show that for every 16,000 people using hearing aids, one person has a cochlear implant. Hearing aids will always fit a wider range of needs for more people than implants.

Bone-anchored hearing aids (BAHS) include a titanium bone implant with an external sound processor. Like the cochlear implant, BAHS require surgery. But instead of using the auditory nerve to transmit signals to the brain like a cochlear implant, bone-anchored hearing aids use the hearing bone. Specifically, BAHS convert sound into vibrations that bypass the nerves and impact the surrounding hearing bone.

BAHS are primarily used for profound hearing loss in one ear, whereas cochlear implants are suited for one or two ears.

Both Hearing aids and cochlear implants can improve a person’s wellbeing. Their benefits include improved speech understanding, the ability to hear music, knowing where sound is coming from and improvements to tinnitus.

For a small group of people who would never have the chance to hear otherwise, cochlear implants will offer them the amazing gift of hearing. Hearing aids remain the more accessible option for most people and will help improve the quality of life for people of all ages.

Cochlear implants require surgery that could come with complications. Also, due to the nature of the implants, they destroy whatever remaining hearing the ear has naturally.

Yes, but not in the way you might think. The implants deliver impulses to the brain, giving the sensation of sound. The user may need a consultant to help them learn how to interpret those signals.

No. Hearing aids only amplify sound through microphones. This means that a deaf person will still not be able to hear even if sound is amplified.

Medicare and Medicaid usually cover some, but not all, of the cost of cochlear implant surgery. Speak with your insurance provider to see how much they will cover. 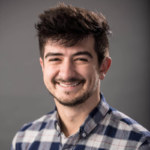 Zach Riggs has worked as a professional writer since 2016 covering topics in healthcare, tech and personal finance for publications including Forbes, MarketWatch, Gizmodo and more. He currently specializes in coverage on hearing aids and medical alert systems.