Why You Can Trust Our Expert Review

Each product we review and recommend has been thoroughly researched. Our review team has interviewed experts in the field, including audiologists and geriatric care professionals. We mystery shop brands and evaluate verified customer reviews from reputable third parties, including Better Business Bureau and Trustpilot.

Why Oticon Is One of Our Top Picks

We decided Oticon hearing aids were worth an in-depth review because of the variety of styles you can purchase for mild, moderate, severe, and profound hearing loss. Depending on your hearing needs and preferences, Oticon could be the hearing device for you, especially if rechargeable batteries and high tech features are on your priority list, including Bluetooth and wireless connectivity.

* For More, Opn S, and Xceed models, these ranges were sourced from information published by ZipHearing and HearingTracker. Prices for Ruby and Siya were gathered from HearingTracker. Oticon CROS generally costs about $1,000, according to multiple websites.

Oticon’s models serve people with all types of hearing loss (mild, moderate, severe, and profound). Here’s an overview of the top models available.

Oticon More is the company’s newest hearing aid model. It’s the first of its kind equipped with Oticon’s BrainHearing technology, an on-board deep neural network offering superior sound processing for people with mild to severe hearing loss. The Oticon More was released in 2021 and has already won several industry awards for its artificial intelligence capabilities and design.

According to Oticon, the neural network in Oticon More was trained with 12 million real-life sounds, delivering 30 percent more information to the brain than its Opn S model while improving speech understanding by 15 percent. Its new Polaris chipset provides an eightfold increase in memory and double the processing power of its predecessor, the Velox S.

This model comes in three options: More 1, More 2, and More 3, each offering different configurations, processing channels, and fitting bands. Also, there are two styles in multiple colors: The miniRITE R, a lithium-ion battery-powered rechargeable style, and the miniRITE T, which sits behind the ear. The miniRITE R provides a full day of battery life after a three-hour charge. (The style is available for Oticon More, Ruby, Opn S, and Opn Play.)

A rechargeable battery is available with this model if customers choose the miniRITE R style. The telecoil option comes in the form of the miniRITE T, and a more powerful BTE PP (behind-the-ear plus power) serves people with severe to profound hearing loss. 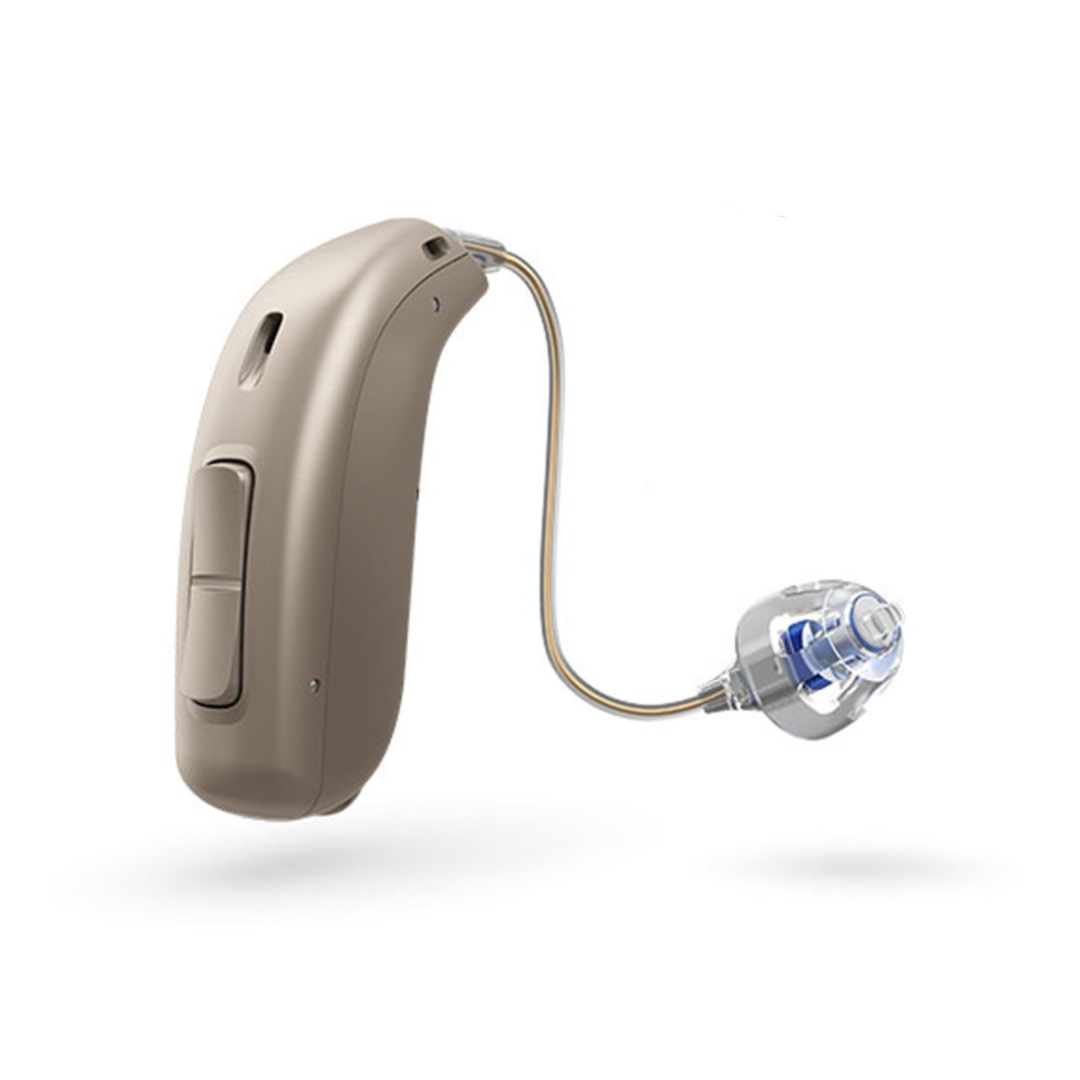 Built for adults and children with single-sided deafness, the Oticon CROS family is great for people who need a fully immersive sound experience. Built on the Velox S platform to enable transmission from one ear to another, the two-part device features a transmitter in one ear with a microphone that picks up sound, which is then carried to the hearing aid in the user’s unaffected ear. The device also includes a TwinLink system to connect external audio streams.

Oticon claims CROS provides 50 percent improvement in speech awareness when streaming from an external source and transmitting sound from the affected ear to the unaffected ear.

The Oticon CROS PX style offers a rechargeable option. The CROS family is available in seven colors and is compatible with miniRITE, miniRITE T, miniRITE R, BTE and BTE PP, SP, and UP styles. 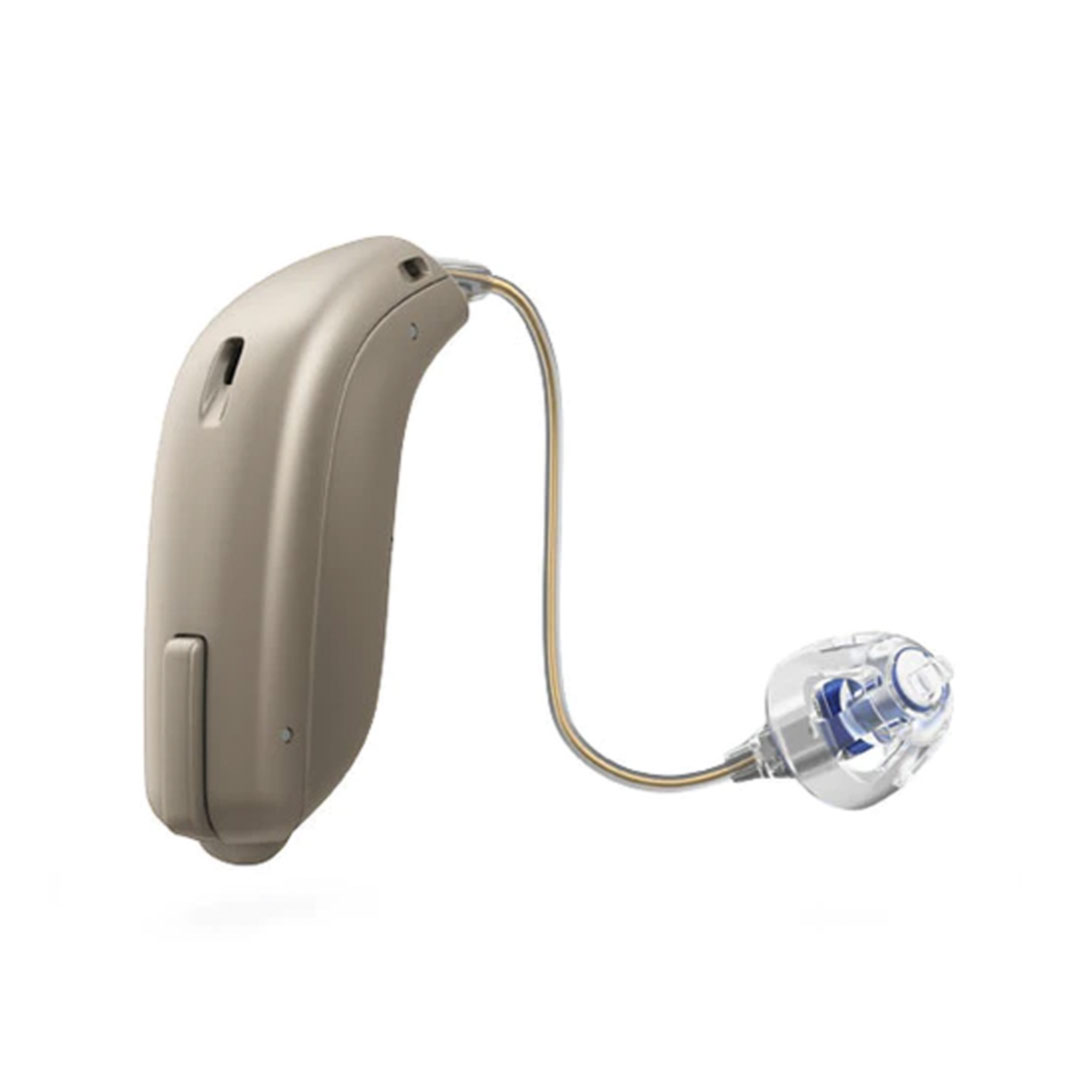 Designed for adults with mild to severe hearing loss, the Ruby is a behind-the-ear hearing aid offering high sound quality, wireless connectivity via Bluetooth low-energy technology, and a lithium-ion rechargeable option that provides a full day’s charge in three hours. The company boasts that Ruby has the best Oticon sound quality ever offered in its essential category. The rechargeable miniRITE R style is available for Ruby models, as is the telecoil option (miniRITE T) and BTE and BTE PP options.

The Xceed model, the Oticon hearing aid for people with severe to profound hearing loss, is great for people who require additional power in their hearing solutions. The Xceed BTE UP (behind-the-ear ultra power) has a 675 battery, separate push buttons to manage programs and volume, a telecoil, FM support, and LED indicators. On the other hand, the BTE SP (behind-the-ear super power) version has a 13-size battery but shares similar specifications with the UP version.

Unfortunately, Oticon doesn’t share its pricing details online, leaving consumers in the dark on how much they can expect to pay. Since Oticon doesn’t sell to consumers directly, prices will vary depending on which hearing specialist you buy from.

That said, HearingTracker has average retail prices submitted by local hearing health care practices. According to the site, the Oticon hearing aids price range is $1,262 to $3,750 per unit, depending on the model.

Hearing aids usually aren’t covered by insurance, so you will most likely need to pay out of pocket. That said, some hearing specialists offer financing programs with a monthly payment plan, so be sure to ask about that.

Original Medicare (which includes Medicare Part A and Medicare Part B) does not cover hearing aids or fittings, according to the Centers for Medicare and Medicaid Services. However, some Medicare Advantage plans sold by private insurance companies include coverage for hearing services and devices. You also might be able to get reimbursed for hearing aid costs through your flexible spending account (FSA) or health savings account (HSA).

The Oticon App and Accessories

The Oticon ON mobile application, available for Apple and Android devices, allows users to adjust volume, switch programs, check their battery level, adjust streamed sounds, and view user instructions. It’s worth noting that the Android app has a 3- out of 5-star rating on the Google Play Store, based on more than 4,400 reviews as of mid-November 2021. The iOS app has a 3.5- out of 5-star rating based on 40 reviews on the Apple App Store.

As for accessories, the Oticon ConnectClip accessory allows wearers to make hands-free phone calls from any smartphone, serving as a remote control. Oticon also has a TV adapter with a range of 45 feet so wearers can stream movies and shows from their television.

The Oticon support page is complete with how-to videos, instruction manuals, care guides, and articles. If you need help with something specific, you can email or call the company’s support team directly.

It’s worth noting that reviews of Oticon hearing aids have mixed ratings on third-party review sites:

Comparing Oticon to Other Brands

What to Consider Before Buying Hearing Aids

Things like budget and style preferences are critical factors for any purchase, but with hearing aids, the buying process also includes a diagnostic element. Bria Collins, AuD, CCC-A, and associate director of audiology professional practices at the American Speech-Language-Hearing Association, says that when shopping for hearing aids, the first step is to know the degree and type of your hearing loss so you can understand which options would be appropriate for your individual hearing needs.

Next, Collins says consumers should take lifestyle preferences into account, considering particular sounds or settings where hearing is strained, such as a restaurant or office environment or when talking to children. “The hearing aid style and customization can be personalized to meet each patient’s needs,” adds Collins. “For example, there are now hearing aids that utilize artificial intelligence to help you hear better, and some styles of hearing aids are almost invisible.”

Collins emphasizes the importance of having a full hearing evaluation and functional needs assessment from a licensed audiologist with either a master’s or doctoral-level degree and thousands of clinical training hours in diagnosing and treating hearing loss.

Rhee Rosenman-Nesson, AuD, CCC-A, and founder of Hearing Doctors of New Jersey, says the first step is a comprehensive hearing evaluation by a doctor of audiology, who can help you determine whether you have an impairment, and to what degree it is.

“During the hearing evaluation, the doctor of audiology will take a thorough case history to understand your medical history and related health conditions and also ask questions to understand what specific situations you are having difficulty hearing in, as well as examine your ears and perform the hearing assessment,” says Rosenman-Nesson. If a hearing aid is needed based on the results, testing in noise should be performed with several different hearing aids to establish which one will help you hear the most clearly.

How We Reviewed Oticon Hearing Aids

We assessed the value of Oticon hearing aids and whether or not they’re worth purchasing based on a number of factors, including:

Also, with no option to purchase Oticon hearing aids online, consumers who’d prefer a quick and easy buying experience might want to look into a different brand. You’ll need to physically go to a hearing clinic to get specific pricing based on your fit and to place an order with Oticon.

So, are Oticon hearing aids worth the money? If you have mild to moderate hearing loss, there are plenty of other brands offering similar hearing aids for a better price. However, people with severe to profound hearing loss can benefit from Oticon’s high-power hearing aids and might be willing to pay more for them.

Oticon is considered one of the “big six” hearing aid firms—a collective of manufacturers that dominate the market. Others include Sonova/Phonak, ReSound, Sivantos, Widex, and Starkey. But despite being a top player in the industry, Oticon has drawn quite a bit of negative feedback from customers on third-party sites like Better Business Bureau and Trustpilot.

Oticon More, released in 2021, is one of the top hearing aid models on the market. More stands out from competitors for its unique BrainHearing technology, a deep neural network designed based on the functions of the human brain.

Oticon kicked off 2021 by unveiling its More series, with an additional set of styles and features released in August. It’s certainly possible that Oticon has a new release on the horizon, but the company hasn’t made any formal announcements indicating such. 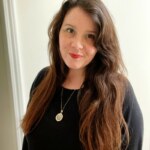 Shannon Cuthrell is a North Carolina-based freelance journalist with a background covering business, technology and economic development. She has bylines in a variety of print and online news outlets, including Business North Carolina magazine, WRAL TechWire, NewsBreak and EE Power, among other publications. She graduated from Appalachian State University in 2016 with a bachelor’s degree in communication journalism and two minors in English and psychology.